...and has already helped immensely with my/our 'Sanity Management Project'...she cooks, shops, advises, entertains, and is entertained by our messy & chaotic situation - in short, she is the perfect guest for The Fahm and is restoring our spirits.
In addition to above, Michele also validated my sneaking suspicion/dawning understanding that living in a 250+ year old 5,000 square foot drafty wood stove-heated (for the moment) Fahm is a helluva lot of W.O.R.K.
Wednesday morning Raj went to Hartford to see his mom Nancy; I was wrestling a migraine and Michele and I opted to stay here for the day.  I went upstairs to lie down, while Michele entertained herself by minding the fire in The Gift Stove and thumbing through Joanna's cookbooks and cooking magazines. After a while I roused myself enough to stumble downstairs only to have Michele announce that she wanted to cook up the chili and corn bread recipes she'd discovered in a 10 year old Bon Appetit Thanksgiving issue.
This led to a conversation as to how to simplify some of the daily chores we're doing that are taking a toll on our bandwidth so far as everything else is concerned.  Cooking and shopping for cooking are two chores that, while enjoyable for me, are also harder here at The Fahm than at home.
The nearest grocery store, The Big Y (American owned since 1936!) is 6 miles away.  One cannot buy booze in a grocery store here in Massachusetts - one must go to a special store, The Package Store, for such things.  Farm fresh (!) peaches, apples, tomatoes, flowers, and pumpkins can be had at any one of the several honor system roadside stands.  Lovely, but still - any 'complete' shopping trip for groceries requires a minimum of two stops.  Oh big deal, right? 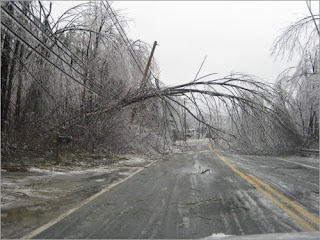 Anyfreezetodeathonyourway,  Michele suggested simple things, like buying pinto beans, potatoes and onions in bulk and keeping a pot of them on the stove all the time for cheap hot meals.  We made an elaborate shopping list and since Migraine was still lurking in the back of my skull waiting to reemerge, Michele decided that she would have a little adventure by going to the store herself. When I suggested she allow me to program the GPS navigation system we have in the car ("reCALCulating!"): 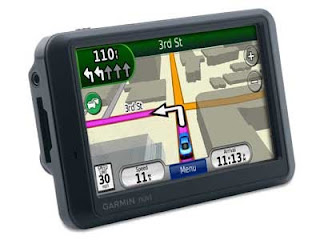 ...she declined, saying offhandedly that she was pretty sure she could figure it out.  I drew a crude map (well & truly the blind leading the blind) and off she went though not before warning me very sternly that it was MY job to keep the kitchen fire going while she was gone: the Kitchen Fire must be kept burning NO MATTER WHAT.

After carefully building up the fire (not wanting to get in trouble if I failed to KEEP THE KITCHEN FIRE BURNING NO MATTER WHAT) I decided to start the brown rice and pinto beans and shred the chicken for burrito night (Michele's idea).  After cleaning up the kitchen (and tending the fire), I realized that Michele had been gone for a very long time.  I went upstairs with the kittehs trailing along and got on the Internets, taking my cell phone and the land line with me.
Hm hm hm...
Finally, a phone call. Michele was at The Package Store in the Princeton Post Office Plaza and had been driving around and around, lost.  The turn on to Ball Hill Road from Worcester St./31 is very, very easy to miss and miss it she had, apparently several times.  In trying to get reoriented, she named a couple landmarks that she had driven by - none of which were familiar to me - not surprising since I don't get out much here. She hadn't actually made it to the market just yet but was using her time well nevertheless, having a lovely scenic New England Fall afternoon drive.
I told her that if she didn't use the GPS system I wasn't going to be able to help her; she turned it on immediately and I walked her through the interface so she could set up her route.  After that, success! Michele eventually returned to The Fahm with a car load of groceries and we continued our burrito night prep.
Last night Michele made turkey and pinto bean chili while baking first corn bread, then brownies. 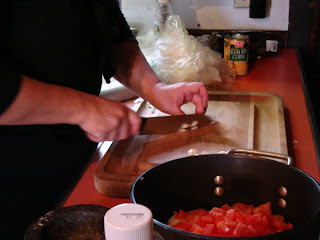 Look at the speed of that right hand! 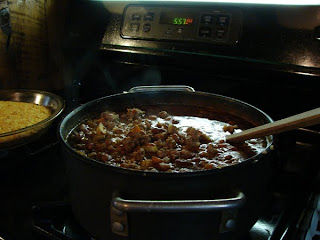 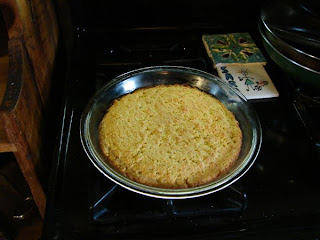 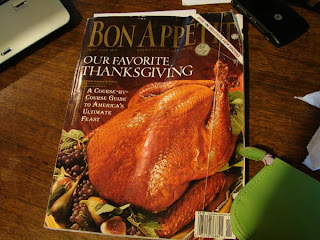 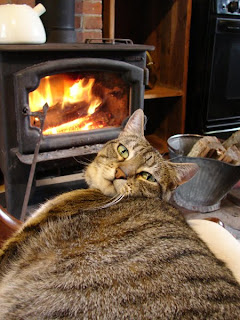