If you own cats or have ever owned a cat, you are painfully familiar with their propensity to throw up often and frequently. It's like they can read.

It might be a hair ball, it might be cat grass, it might be an Unspeakable Horror, whatever it is, Kittehs are not shy about sharing the contents of their stomach.  Cat Grass - aka wheat grass or oat grass 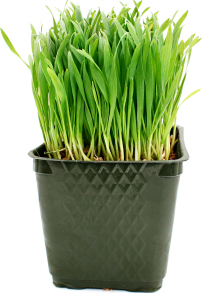 is a big favorite on The Kitteh Menu around here. It has been ever since I discovered that feeding Kittehs cat grass will keep them from eating house plants or floral arrangements. My Dear Readers should consider this Medical Cat Grass though - not recreational. Kittehs aren't playing when they snarf that stuff up.  I wouldn't say that Cat Grass stops the inappropriate snacking entirely but it does cut down on it a great deal, and The Grrlz LURVE it, curling and crowding my ankles when I serve it.
Once long ago in a city far, far away from here (Berkeley, CA circa Before We Moved Here) somecat I blame Tricksy saw the

sign oddly enough and in of all places, under our bed.  Being the obedient Kitteh she is not she regurgitated her most recent dose of Cat Grass immediately, on the spot.  Moments later she must have realized that the sign under the bed was a mirage, a hologram, a projected desire, not the actual Vomit Here sign, which doesn't typically appear under the bed.  In her deep embarrassment over her hallucinatory error, she grabbed the closest Thing at paw to clean her mess up.
That's the moment when Ugly Doll's day went from Bad to Worse.  Ugly Doll's day started badly when Ugly Doll was rudely booted out of the bed and onto the floor for no reason at all. Leaving a critique of my cleaning skills vis a vis 'under the bed' for later, suffice it to say that Ugly Doll was very discouraged by Ugly Doll's surroundings. And then the real insult occurred. The 'Thing' closest at paw when Tricksy reached for a Handi Wipe TM was Ugly Doll.  And Tricksy used Ugly Doll to wipe up her vomitus. That's when Ugly Doll knew without a doubt that Ugly Doll was having A Very Bad Day.
Posted by Sara at 3:46 PM