Wait, Wait, WAIT - Didn't They Say It Couldn't Be Done?

The U.S. Marshals Service has admitted to SAVING 35,000 Airport Body Scan images!  I beg your humble pardon? WHAT? Oh! Were the images saved while the scanners were in TEST BOGUS mode?


"The U.S. Marshals Service admitted this week that it had surreptitiously saved tens of thousands of images recorded with a millimeter wave system at the security checkpoint of a single Florida courthouse.
...

A 70-page document showing the TSA's procurement specifications, classified as "sensitive security information," says that in some modes the scanner must "allow exporting of image data in real time" and provide a mechanism for "high-speed transfer of image data" over the network.
...

William Bordley, an associate general counsel with the Marshals Service, acknowledged in the letter that "approximately 35,314 images...have been stored on the Brijot Gen2 machine" used in the Orlando, Fla. federal courthouse. In addition, Bordley wrote, a Millivision machine was tested in the Washington, D.C. federal courthouse but it was sent back to the manufacturer, which now apparently possesses the image database."

I hate people sometimes, I surely do. Stories like this make me want to bite people, really hard, and not in a fun way.

All that's left to say is, Welcome to Flying Pasties! 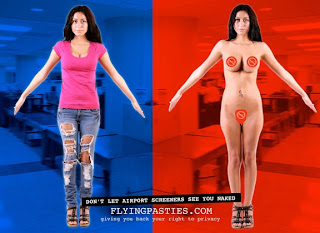