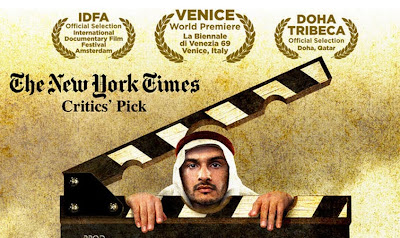 Valentino's Ghost: The Politics Behind Images, is the hard-edged film I hope you have already been hearing about.  The film exposes ways in which the U.S. foreign policy agenda in the Middle East drives and shapes the mainstream media's and Hollywood's portrayals of Arabs, Muslims, and Islam.  It is not for the faint of heart. Click here to see the trailer.

Designated a Critics' Pick by The New York Times, called "brilliant" by @MJayRosenberg, and "thrilling" by The Village Voice, Valentino's Ghost received six figures of funding from PBS, which is showing only its truncated version due to controversies raised by the film.

Valentino's Ghost: The Politics Behind Images has qualified for Oscar® consideration for the 86th Academy Awards®, and we are simultaneously trying to go wide with self-distribution, hence this post asking for your financial support toward the cost of spreading the word about this film, which I am proud to say I have had some small involvement in. The IndieGoGo campaign site is here.

Your support, no matter how small, would give this film the higher profile it needs in its dual mission for Oscar® consideration and self-distribution. No American distributor will touch it.  Neither will any major American film festival, even though the Director of the world's oldest and most prestigious Venice Film Festival, Alberto Barbera, said, "Valentino's Ghost is a great and very important film."

I hope you will conclude that the Valentino's Ghost project and predicament merit your support.  You can view the trailer and see more reviews at www.valentinosghost.com. Please help.