My mom Barbara and cousin-in-law Kim had long-planned to visit The Fahm in early May; our guests were also interested in doing a little touring in Boston. As a Hotwire devotee, I was tasked with finding lodgings for our sojourn in town. I knew of a lovely chain hotel located somewhat outside the city center that offered free parking and reasonable room rates along with a free shuttle to and from the nearest T stop but after the tragic events at the Boston Marathon finish line and subsequent city shutdown, I decided to look at other options. 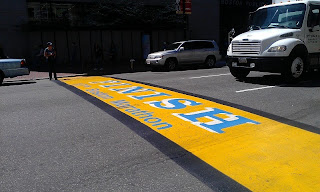 I wasn't thinking about the economic health of the chain (or otherwise not-hurtin-for-money) hotels or restaurants or stores in the area; I was thinking about the housekeeping and waitstaff and sales associates of those same establishments  for whom the loss of income necessitated by security lock-downs might prove nearly as catastrophic as the bombs themselves. If you have lived paycheck-to-paycheck as I have, you know what  that resulting loss of income means in terms of family budgets of low-wage workers all over the greater Boston area: less food on the table and rent payments deferred, for a start. The ripple effects in an economy already on its knees with so many already on the financial razor's edge are already being felt.

So we booked three rooms at the Westin Hotel at Copley Place, and ate, walked, and shopped our way from Copley Place and Boston Common to the Freedom Trail and back again, until our feet hurt and our wallets squealed, all to support real people who were actually affected in material ways by the bombings and aftermath. And we were not alone. The City of Boston's streets were jammed with traffic and pedestrians, going about life just exactly as usual, the most beautiful rebuke to hatred and violence of all. Business is booming. The Sox had a no-hitter and a near-perfect game the other night, and the Bruins advanced to the second round of NHL playoffs. Life, for this moment, is good.
Posted by Sara at 9:37 AM