Knock That OFF, Internets

Some of you may be aware of the propensity of victim-blaming in our culture particularly in such matters as rape and other sexual assault UNDERFUCKINGSTATEMENT, particularly when the victim is female. The rhetoric from politicians about what is or isn't legitimate I mean come on WTF? rape that rose to a crescendo during the recent election cycle continues in bills being considered that severely limit access to not just abortion and birth control including the morning-after pill, but also to basic sex education in our schools.

In the wake of two recent high profile events: the media coverage of the Steubenville verdict bemoaning the lost opportunities of the perpetrators just determined guilty, and the recent #donglegate nightmare involving Adria Richards wherein at a tech conference she challenged and publicized the ubiquity of double entendres* in the tech world resulting in an absolute shitstorm of hate directed at her and the loss of her job, have given those of us paying attention to such things a(nother) wake-up call.

The wake-up call is this: we do not live in a world that is safe for women. And it's not just in India or Afghanistan where women are not safe. It is right here in the U.S. in Silicon Valley, Steubenville, Ohio, and seems like pretty much everywhere else. For me it hits particularly hard to see the ugly confluence of misogyny, patriarchy, slut-shaming, gender bias, sexual harassment, and sheer bigotry emerging from a community near and dear to me, that is, the tech world.

For better or worse, most of my waking hours are on the Intertubes either working or trolling for information of general interest; the opportunities to encounter sexist, heterosexist, racist, classist, and/or whateverthefuckist are myriad, and have been as long as I've been on the Intertubes, that is, going on 20 years now (yes, I'm an Old). But these last two incidents have just chapped my hide far beyond the usual and I have been wrestling with how to deal with it, how to salvage this as a teaching/learning moment for myself and the women and men in my life rather than just a rage moment for me.

Then I stumbled on this Twitter feed and after laughing/crying til my stomach hurt, I think it's time to share: #SafetyTipsforLadies is a Twitter feed started by hilaroar at tumblr.com/ where humor is used to blaze a path forward from this very dark age we are (apparently) still in and is well worth the read (and a forward to a friend) if you are so inclined. It satirizes classic "anti-rape" advice so beautifully and well with such darkly bitter humor; it is very hard to avoid the crazy. Here are some examples (I particularly like the last one): 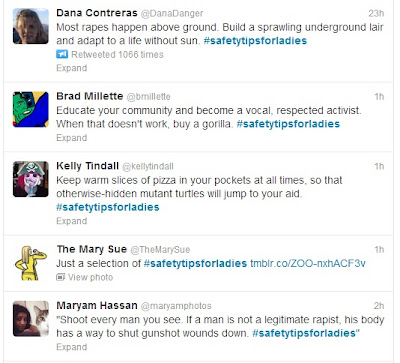 * #donglegate is a perfect example of why double entendre is a problem in the workplace.  "A double entendre is a figure of speech in which a spoken phrase is devised to be understood in either of two ways. Typically one of the interpretations is rather obvious whereas the other is more subtle. The more subtle of the interpretations may have a humorous, ironic, or risqué purpose. It may also convey a message that would be socially awkward, or even offensive, to state directly. (The Oxford English Dictionary describes a double entendre as being used to "convey an indelicate meaning".)" - From Wikipedia