One of the Kittehs threw up on my bedspread during the night although they were discreet enough about it that I did not wake up during the deed.  Instead, I awakened to a spreading stain, the remnants of a kibble breakfast, and a hairball.  I stripped the bed and took the sheets downstairs, headed for the washing machine which is in the downstairs bathroom.  I haven't started the load yet, but only because there was a SNAKE in the middle of the FLOOR.
I must confess that my nerves were a little shot and I couldn't for the life of me think of what I was supposed to do, having never been trained in the fine art of SNAKE REMOVAL. It was not a very big snake, maybe between 8" - 10" long, and about as fat as a #2 pencil, but a snake is a snake is a snake so I retreated back up the stairs, collaring Tricksy on my way, and decided to call the Calvary David Oles, Justin Sobel to assist.


David didn't answer, and Justin said he'd be down in a little bit; I got the camera and went back down to see if I had imagined the whole thing.  But no, there was STILL a SNAKE on the FLOOR of my bathroom, only now it was nuzzling up to the wall instead of lying right in the middle of the floor. A few minutes later it was across the room exploring a plastic bag.  I took pictures. 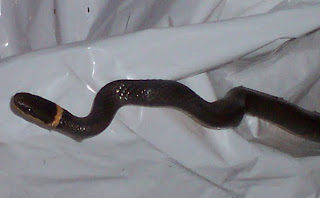 David called back and said he was walking through the field toward The Fahm in answer to my S.O.S. so I called Justin back and told him he could stand down. David picked up a stick on his way in the door, asked me for some cardboard, and armed thusly, went into the bathroom to wrangle the thing saying, as he did so, that he didn't know what kind of snake it is, and hadn't seen one like it before. I know what kind of snake it is - it's obviously a HOUSE snake. 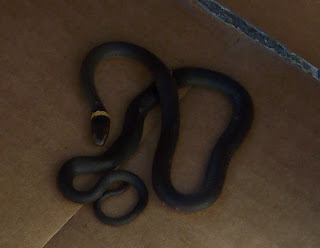 We took it outside and released it in the garden, right onto a nice warm rock. It is not a very smart snake because it slithered down off the nice warm rock and headed straight for a patch of snow on the ground and buried it's head therein. Now that it is no longer in my bathroom I can feel sorry for it although after David suggested that there might be more where this one came from, I didn't feel quite as benevolent.
Apparently this was my introduction to the Northern Ringneck Snake AKA the Diadophis Punctatus Edwards II, though I don't mind saying I hope I do not meet another, at least not INSIDE MY HOME.
Posted by Sara at 5:11 PM