The Basement at Brimstone Manor - Reprise

Yesterday I drove to Hartford to take Raj's mom Nancy to the eye doctor.  We took the shuttle from Avery Heights to the office and aside from a brief shuttle lift malfunction, a good time was had by all.  It has been raining off and on - mostly on - for what seems like weeks so I left Hartford shortly after lunch hoping to be home before the sleet, snow, or freezing rain developed (call me crazy).

I was very much looking forward to reading more of The Namesake in front of the kitchen fire but alas, that dream was dashed moments after setting foot in The Fahm.  I heard a loud rushing sound, as if water was running somewhere; it wasn't long until I located the source. It seemed to be coming from one of the giant intake thingies near the basement door.  I knew I was going to have to investigate.

I snapped on the basement light, forbade the kittehs to follow me, and started down the stairs. I went down several steps before realizing that there was something seriously wrong with the basement floor. It took my California Grrl eyes a moment to process what I was seeing: the basement floor looked weird BECAUSE IT WAS UNDER TWO FEET OF WATER. 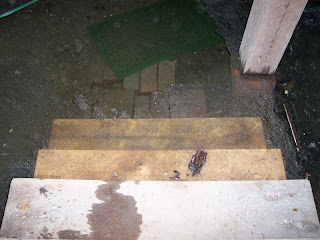 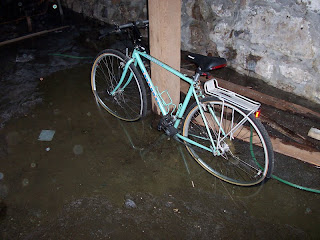 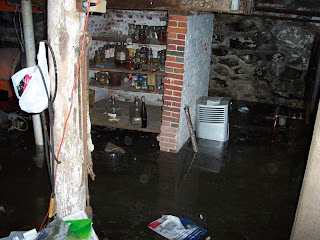 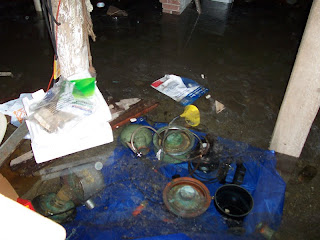 I beat a quick retreat up the stairs and hastily shut the basement door.  I paced around for a minute, with the queasy feeling that The Fahm was afloat and/or sinking, then grabbed a phone and started working my way through the list of people to call if I need something (say, like a boat, a set of oars and a snorkel). The first call was to David Oles and the second to Justin Sobel; I left messages for both.

David Oles returned my call immediately, and suggested I call the Princeton Fire Department because they would likely have a pump big enough to do the job that needed to be done.  He promised to stop by on his way home from work. Because I am an ignorant newbie when it comes to such things, I had no idea that having the furnace underwater put me at the top of the PFD's priority list for assistance but in these parts they take things like COLD pretty seriously, and with temperatures in the 30s and snow predicted, they did not want to see The Fahm without heat.

By this time I had spoken with Raj, and he called Pioneer Oil - from whom we purchased New Shiny; they dispatched a furnace fixer immediately. I heard from Mike who had already been on the phone with the insurance company. The Princeton Emergency Dispatch Operator called me back to tell me the troops were on their way, and before long the first truck arrived, with two firefighters.  Ken introduced himself and came inside; I showed him the basement stairs, which he quite naturally started down only to have his foot go right through the rotten board that formerly comprised the top stair. Ken was a very good sport about everything, and continued his inspection. It wasn't long before the second firetruck arrived, this one with an officer and more firemen aboard, followed in quick succession by Pioneer Oil and David Oles, who arrived wearing black rubber knee boots which I thought incredibly practical.  To show solidarity, I donned my own black rubber knee boots though mine have polka dots which added a lovely note of festivity to the proceedings. 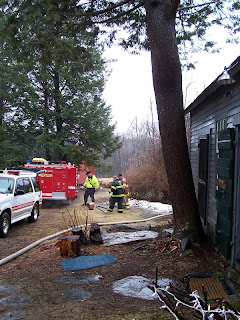 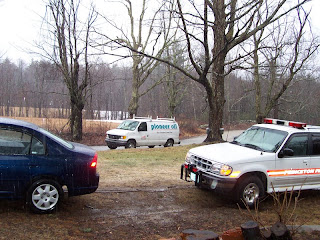 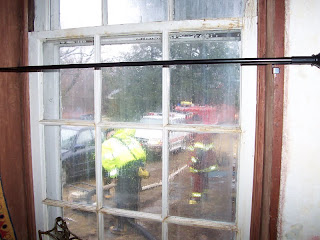 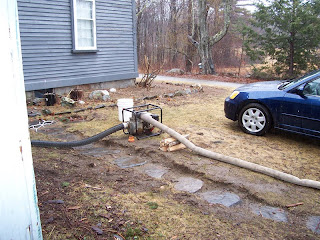 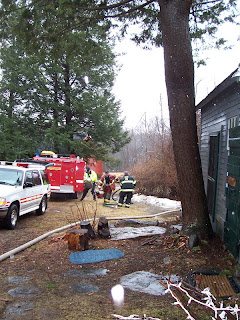 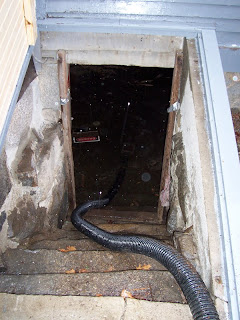 David brought two small sump pumps with him, and heavy duty extension cords; he came upstairs from the basement at some point in the proceedings asking me for a box, explaining that he had found ANOTHER SNAKE, this one in the basement under a rock.  This snake was rather more sluggish than the other, quite possibly due to being underwater in our basement, and David caught it without resistance. 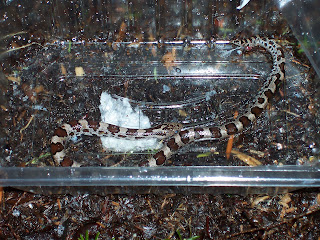 The pumping went very quickly and it didn't seem like very long before the Princeton Fire Department left, to make their next stop at another person's basement; apparently they have been doing this for Town residents since the day before yesterday.  An insurance agent called, and the Pioneer Oil man left but not before admiring the giant copper water heater in the kitchen; David came by one last time to check on the pumps and the basement, this time bringing Monique, who added her own note of festivity to the occasion in her shiny red rubber boots.

All in all, a very full day.  But here on The Fahm, aka Brimstone Manor, as Mike put it this morning, "...in any case, ever vigilant, onward we march!"
Posted by Sara at 8:55 AM